Israel, Once the Model for Beating Covid, Faces New Surge of Infections 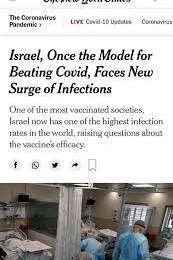 One of the most vaccinated societies, Israel now has one of the highest infection rates in the world, raising questions about the vaccine’s efficacy.

Israel offered the world a hopeful glimpse of the way out of the pandemic.

A fourth wave of infections is rapidly approaching the levels of Israel’s worst days of the pandemic last winter. The daily rate of confirmed new virus cases has more than doubled in the last two weeks, making Israel a rising hot spot on the international charts.

Restrictions on gatherings and commercial and entertainment venues were reinstated this week, and the government is considering a new lockdown.

“I believe we are at war,” Israel’s coronavirus commissioner, Prof. Salman Zarka, told a parliamentary committee on Wednesday.

Scientists are still assessing how Israel’s pandemic response plunged from shining example to cautionary tale, and the stunning reversal has provided a crucial test for Israel’s new prime minister, Naftali Bennett, who staked a claim for leadership partly on the strength of his manifesto, “How to Beat a Pandemic.”

But some experts fear that Israel’s high rate of infections among early vaccine recipients may indicate a waning of the vaccine’s protections over time, a finding that contributed to a U.S. decision Wednesday to begin offering booster shots to Americans starting next month.

The vaccine may be less effective at preventing infection with the highly contagious Delta variant, now the primary version of the virus in Israel. And the first cohort to be vaccinated was an older group whose immune systems may have been weaker to begin with.

By June, Israelis, convinced the worst was over, had abandoned social distancing and other precautions.

“Everyone went about the business of trying to put the memory of a very difficult year and a half behind them,” said Prof. Ran Balicer, chairman of an expert panel that advises the Israeli government on Covid response.

“At that point in time,” he said, “the paradigm for many was that Israel is the most vaccinated country in the world, that vaccinated people rarely become infected, that even more rarely do they become severely ill and that basically, with very few precautions in place, the population was very close to herd immunity, all things considered. That was not a mistake.”

The problem, he said, was that what was true for the original virus “did not necessarily hold true for future variants coupled with waning immunity.”

The vast majority of Israel’s older population had received two doses of the Pfizer-BioNTech vaccine by the end of February, and by now about 78 percent of the population 12 and older are fully vaccinated.

The vaccine is still believed to help prevent severe illness in those who do become infected, though some Israeli data suggests the possibility of an increased risk of severe disease among those who received early vaccinations. The number of deaths in Israel has climbed in the past month as the infection rate increased.

Seeing infection levels dropping in the spring, and determined to reboot the economy, Israel retired its electronic pass system, eased travel bans and lifted all other restrictions. The last to go was the indoor mask mandate on June 15.

Days earlier, however, a family had returned from a Greek vacation to the central city of Modiin, a middle class commuter hub between Tel Aviv and Jerusalem. More than 90 percent of its residents 12 and over are vaccinated, according to its mayor, Haim Bibas, making it one of Israel’s most vaccinated cities.

But the family included a child too young to be vaccinated, and who should have spent at least 10 days in home quarantine pending a negative PCR test, according to the regulations at the time.

Instead, the parents sent the child to school. Ultimately, about 80 students were infected with the Delta variant.

“The child wasn’t to blame,” Mr. Bibas said, indirectly pointing a finger at the parents.

A second outbreak occurred almost simultaneously in similar circumstances in a school in the north.

The Delta variant has since taken over in Israel, and now mainly comes from within the country.

Professor Balicer had warned in May that despite the early success, Israel’s pandemic was not over. There was the continuous risk of variants that could be more impervious to the vaccine. Out of a population of nine million, about a million eligible Israelis have so far opted not to get vaccinated at all. And among the fully inoculated, Israeli scientists have found growing evidence of waning immunity, particularly among the older population who were vaccinated first.

Data published by Israel’s Ministry of Health in late July suggested that the Pfizer shot was just 39 percent effective against preventing infection in the country in late June and early July, compared with 95 percent from January to early April. In both periods, however, the shot was more than 90 percent effective in preventing severe disease.

Experts warn that these early assessments have not been scientifically proven: The small numbers of cases involved, Israel’s testing policies and a host of other biases could have skewed the results.

Still, as summer approached, infections began to spiral. School was out, families crowded local hotels and up to 40,000 people a day were flying abroad, even as the Delta variant was rampaging across the globe. After many days of zero Covid deaths in June, at least 230 Israelis have died so far this month.

Some experts have accused the new government of having been slow to respond.

The resurgence of the contagion coincided with the swearing in of Mr. Bennett’s government in mid-June. After three Israeli lockdowns, Mr. Bennett came in with a new approach, determining that the country had to live with the virus and keep business operating at full capacity. He called the policy “soft suppression.”

An indoor mask mandate was reinstated on June 25, but compliance was lax. Alarmed medical experts began to urge stricter measures, including curbs on all gatherings. The government advisory panel called twice — in July and again on Aug. 1 — for the immediate reinstatement of the electronic Green Pass system.

“It was only in the last two weeks that a sense of urgency returned,” said Prof. Nadav Davidovitch, a public health expert and a member of the advisory panel. “What we are doing now, we needed to do in July.”

But after the premature euphoria of the spring, virus fatigue has made returning to strict antivirus protocols difficult.

“It’s a matter of discipline,” said Prof. Galia Rahav, the head of the Infectious Disease Unit and Laboratories at the Sheba Medical Center near Tel Aviv. “People are sick of masks. They want to live.”

Officials worry that many Israelis are still oblivious to the rising danger.

“The Israeli public has not yet absorbed that we are in a fourth, significant wave,” said Tomer Lotan, director general of the Ministry of Public Security, which is responsible for enforcement. “We are still in routine mode, with the feeling that we are vaccinated. It’s hard to make the switch in public discourse and say, ‘Listen, we are in a catastrophe.’”

Israel is now pinning its hopes on booster shots. Beginning with those 60 and older, and quickly expanding the drive to those 50 and above, more than a million citizens have already received a third dose this month. Israeli researchers say there are preliminary signs that new infections among older vaccinated people may have begun to drop.

A preliminary study released Wednesday by Maccabi, an Israeli health-care provider, found that a booster shot of the Pfizer vaccine provided 86 percent effectiveness against infection in people aged over 60, a week or more after receiving the third dose.

A global debate is raging over boosters. The Biden administration announced Wednesday that Americans who received the Pfizer-BioNTech and Moderna vaccines would be able to obtain booster shots eight months after receiving their second doses.

But the World Health Organization contends that available vaccines would be better used to inoculate high-risk people in poor nations where few have gotten the shots and where new variants could emerge.

Most Palestinians in the West Bank and Gaza remain unvaccinated after Palestinian officials rejected a vaccine-exchange deal with Israel in June.

Professor Davidovitch, the Israeli public health expert, got a third shot. But he is now convinced of the necessity of a multilayered strategy, including mask wearing, limiting access to public venues to the vaccinated or those who have recovered from the virus, and measures to strengthen the health care system.

“The vaccinations were supposed to solve everything,” he said. “We now understand that the vaccines are not enough.”