Posted by altaterradilavoro on Mar 3, 2017

The Ancient Peoples of the Southern Italian Peninsula

The beginning of the Neolithic saw new arrivals on the island of Sicily.  Many others, however, chose to stay in the southern part of the Italian peninsula.  As in Sicily, these new arrivals were not a homogenous bunch nor did they arrive at the same time.  Each new wave of arrivals added their own ingredients, culturally and genetically, to the wonderful ‘soup’ that would one day become the Southern Italian people!

The earliest of the Neolithic arrivals were non-Indo-European speakers who left us no written records of their existence.  That plus their primitive level of existence has left us precious little to tell us how they lived.  All that changed, however, with the advent of the Apennine culture (1800-1200 BC) otherwise known to historians and archaeologists as the Italian Bronze Age.

The originators of the Apennine culture were alpine cattle herders who followed their herds into southern Italy from the mountains of the central part of the peninsula.  Apennine pottery is characteristically black that is decorated with spirals, dots, bands of dots and meanders.

Being essentially pastoral peoples, during the time between summer pastures they lived in temporary camps or else in caves and rock shelters.  Otherwise, they lived in small hamlets constructed on easily defensible positions.  Apennine peoples made it as far south as Apulia where archaeologists have found early examples of purple dye and olive oil production.  In addition, there is evidence they had knowledge of and traded with both the Minoan and Mycenaean peoples of the Aegean.

Sometime during the late Bronze Age in Italy (11th-10th century BC) Illyrian-speaking tribes from the region of the Balkans bordering the Adriatic Sea began crowding into the “heel” of Italy (modern Apulia).  Three tribes of these peoples, called Danui, Messapii and Peucetii, settled into the area and founded what historians now collectively refer to as Iapygian civilization. These peoples spoke Messapian, an Indo-European language.

In spite of their common language, these tribes were never really united, politically.  In fact, the tribes themselves were divided up into a number of polities.  Historically speaking, the most important of the tribes were the Messapii.  Their first major town, Hyra (modern Oria) was probably founded sometime around 8th century BC.  Other important towns founded by the Messapii include Brention (modern Brindisi) and Hodrum (Otranto).

In spite of never coalescing into a single nation, the Iapygians developed writing (borrowing the Greek alphabet of the Tarentines) and distinguished themselves in battle as both archers and cavalry.  In fact, Iapygian cavalrymen were able to inflict a serious defeat upon Tarentine Greeks in 473 BC.  Though they traded with the city-states of Magna Graecia (and were able to maintain their independence from them) eventually they succumbed to the advances of the armies of the Roman Republic.  By the end of the 2nd century BC Rome had conquered the last of the independent Iapygian tribes and their language disappeared soon afterwards as the peoples were absorbed into the Roman state.

Another important group of pre-Roman Italic peoples in Southern Italy were Osco-Umbrian-speaking peoples collectively referred to as Sabellians.  These peoples included (but were not limited to) the Marsii, Marrucini, Osci, Bruttii, Lucani and the redoubtable Samnites.  The areas inhabited by these peoples extended from the southern part of modern Lazio all the way down to the southernmost part of the peninsula.  Like Messapian, the Osco-Umbrian tongues were part of the Indo-European family of languages.

The Marsii inhabited modern Marsica (named in honor of them) in what is now the Abruzzi region of Southern Italy.  They are first mentioned by Roman chroniclers as being members of a confederacy with the Vestini, Paelgini and Marrucini.  They joined the Samnites, the implacable enemies of Rome, in their war against the Roman state in 308 BC.  After their defeat they submitted to Roman suzerainty.  They figured prominently during the mass uprising of Italic tribes to Roman rule during the Social War (91-88 BC), so much so, in fact, Roman writers referred to it as the Marsic War.

The leader of the Marsii during this conflict was Quintus Poppaedius Silo. Though he scored a number of successes early in the conflict, eventually the Romans were able to turn the tide.  Silo himself was killed in battle in 88 BC and the Romans, under the command of the patrician general Lucius Cornelius Sulla Felix, exacted a brutal retribution upon their defeated foes.  Though they were defeated, the Marsii nonetheless were able to secure for themselves political enfranchisement within the Roman state.  Shortly after this they disappeared from the pages of history as a distinct people.

Of the tribes collectively referred to as “Osci” the most important were the Campani. They gave their name to the region they inhabited (Campania). They had settled into the area in ancient times, possibly before the beginning of the 1st millennium BC.  From the 7th century to the 4th century BC Greek colonists gradually expelled them from the area.  The Campani, however, eventually adopted the Greek (and Etruscan) practice of organizing themselves into city-states.  By the middle of the 5th century BC the Campani began to retake the lands they had earlier lost to the Greeks.  Among other victories they seized Greek-held Cumae and Capua from the Etruscans, whom they helped to chase out of Southern Italy altogether. Less than a hundred years after this the Campani themselves came under siege by the warlike Samnites.  They appealed to Rome for aid.  With the aid of their Roman allies the Campani were able to thwart Samnite ambitions during the Second or Great Samnite War (326 to 304 BC) but only with the greatest of difficulties.  By the conclusion of this war the whole of the territories of the Campani came under the control of the Roman Republic and the Campani quickly became Romanized.

The Bruttii lived in the southernmost part of the Italian peninsula.  Their territory stretched roughly from the Straits of Sicily north to modern Basilicata.  Unlike other peoples of the Italic peninsula they do not appear to be a people of any antiquity.  Rather, they seem to have been a heterogeneous group composed of runaway slaves and fugitives from the Lucanians to the north and Greeks from the coast who settled in the interior and mixed with native Oenotrian tribes.  The Oenotrians themselves are a people of mysterious origins who many believe arrived in Italy from the Peloponnesus around the beginning of the Iron Age in Italy (11th century BC).  According to this hypothesis, the Oenotrians would have been a Pelasgian (pre-Hellenic) people. They first figure prominently in history in the year 356 BC during the expeditionary war of the tyrant Dion of Syracuse against his predecessor, Dionysius the Younger.  Taking advantage of the chaos surrounding the conflict, they asserted their independence and even succeeded in seizing the Greek cities of Thurii, Hipponium and Terina.  In addition, they were able to force their powerful Lucanian neighbors to the north to acknowledge their independence and even forged an alliance with them.  In their wars with the tyrant Agathocles of Syracuse they reached the height of their power and prestige. Sadly for them, this was not to last.

In the year 282 BC they threw their lot in with the Lucanians and Samnites during their war with Rome.  They also later sent troops to aid Pyrrhus, King of Epirus and the Molossians, during his campaign against Rome. When Pyrrhus, however, was forced to withdraw his forces from Italy and Sicily, the Bruttii were left to face the wrath of the victorious Romans on their own. After their surrender the Romans forced them to give up a considerable amount of their territory.

Though they remained neutral during the First Punic War with Carthage, they foolishly threw their lot in with the Carthaginian general Hannibal during his invasion of Italy in the Second Punic War (218-201 BC). Early victories alongside their Carthaginian allies soon gave way to a crushing and humiliating defeat at the hands of the Romans, who were now determined to punish the Bruttii for their treachery. They were deprived of most of their territory and to further “rub salt in the wound” the Romans pronounced them unfit for military service.  As a nation they were given only the most menial tasks to perform. They disappear from the pages of history under the most ignoble of circumstances.

The Lucanians first wandered into the territory that came to bear their name sometime in the 5th century BC.  They waged war with the Greeks of Tarentum and their ally, Alexander I, King of Epirus, who was treacherously slain at the instigation of a group of Lucanian exiles in 331 BC.

They originally started out as allies of Rome but soon chose to throw their lot in with whoever would war with the Romans.  In war after war they wound up on the losing side.  By the end of the Social War they were finished as an independent people.  By the early part of the 1st century AD the Greek geographer and historian Strabo reported their lands were now overgrown forest and pasture filled with wild boar, wolves and bear.  The few towns that remained were considered of no importance.

Of all the peoples of Southern Italy (Greeks notwithstanding) the ones viewed with the greatest contempt, admiration, fear and respect by the ancient Romans were the Samnites.  For this reason their history shall be covered in a future article.

The Etruscans probably came closer than any other people in ancient Italy (other than the Romans) to making themselves the “top dogs”.  Their origins, like so many others, are shrouded in mystery.  Sadly, though these people are known to have at one time produced a great body of literature, virtually none of it has survived to the present day except some indecipherable fragments.  The Roman Emperor Claudius Caesar (10 BC-54 AD) wrote a sizeable work detailing the history of these fascinating people.  Sadly, this too is now lost.

Scholars are divided over their possible origins.  Some believe they evolved in Italy out of the Villanovan culture in central Italy during the early Iron Age.  Others point to the similarities between the Etruscan language and inscriptions found on the island of Lemnos in the Aegean.  This seems to confirm the Greek historian Herodotus’ assertion of an Anatolian origin for the Etruscan people.  The debate continues.

Early on in their history the Etruscans expanded out of their base in Etruria (modern Tuscany) north beyond the Apennine Mountains and south deep into what is now Campania. They established a number of mining and trading colonies in the latter with the intention of forming a mercantile empire in direct competition with the Hellenic inhabitants of Magna Graecia.

Phocean (Greek) expansion into Campania led the Etruscans to ally themselves with another burgeoning power in the western Mediterranean – Carthage.  The three sides clashed during the naval Battle of Alalia (sometime around 540-535 BC).  Though the Etruscans wound up in possession of the island of Corsica, the Phoceans gained considerable territory for themselves in Campania.

Undaunted, the Etruscans made war yet again on the Greeks of Magna Graecia.  Putting together a large navy of ships from various Etruscan polities, they met the combined navies of Syracuse and Cumae in the Bay of Naples at the Battle of Cumae (474 BC).  The Greeks all but destroyed the Etruscan fleet.  The Etruscans lost not only many of their colonies in Southern Italy but also much of their political influence throughout the Italian peninsula.  Shortly after this their territories began to be invaded by Romans, Samnites and Gauls. The Etruscans made one last effort to re-establish themselves in Southern Italy by joining the failed Athenian expedition against Syracuse in 415 BC.  Their failure hastened their decline and eventual extinction as an independent people.  The last Etruscan stronghold fell to the Romans in the 3rd century BC. 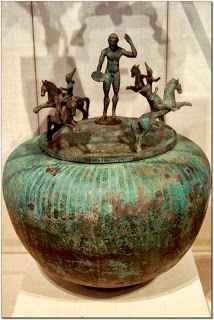 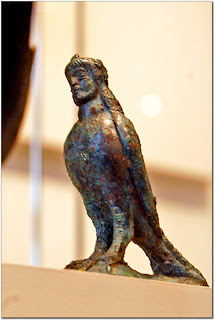 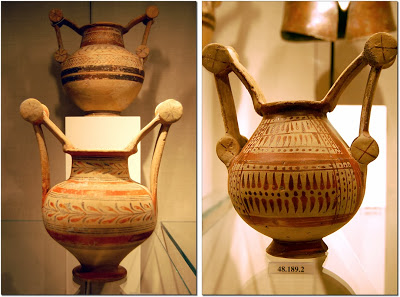 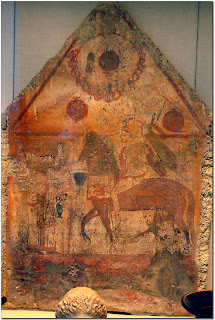 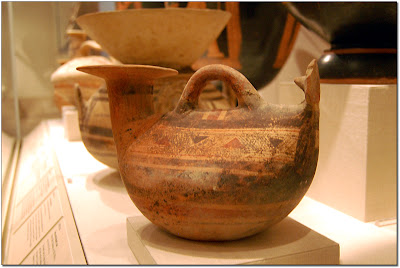 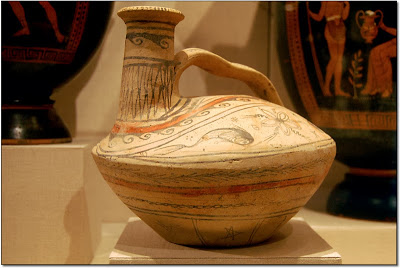 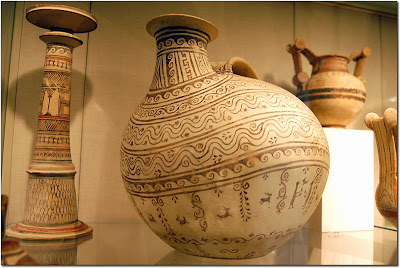 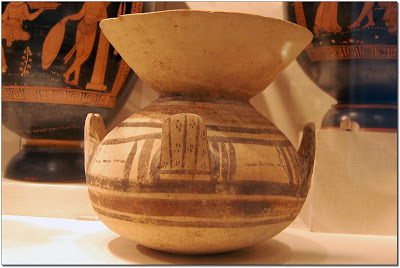 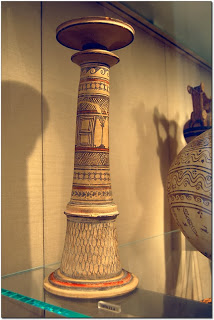 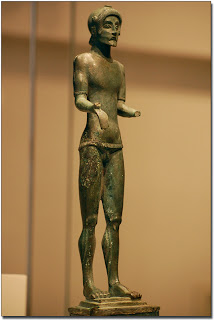