The Coming of the Greeks to Southern Italy, Hellenic Dawn

Posted by altaterradilavoro on Feb 7, 2017 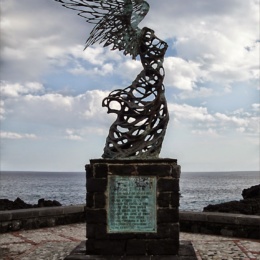 “Greek customs such as wine drinking were regarded as worthy of imitation by other cultures. So the ships that carried Greek wine were carrying Greek civilization, distributing it around the Mediterranean and beyond, one amphora at a time. Wine displaced beer to become the most civilized and sophisticated of drinks—a status it has maintained ever since, thanks to its association with the intellectual achievements of Ancient Greece.” – Tom Standage: “A History of the World in 6 Glasses”

Southern Italy from the dim past has been inhabited by Man. The fossil evidence for this fact is abundantly clear.  The earliest humans enjoyed the treasures of the Mediterranean when they weren’t helping themselves to flora and fauna that lived around the Apennines.

Yet these early humans lacked something. Even when they began to live within the communities we today call town and villages there was something missing from their lives.  It was the high level of culture, science, government and industry that we call ‘civilization’.  Given enough time, one or more of the peoples’ native to the region would have undoubtedly initiated the spark that would later give rise to the polities known as city-states, but history dictated that spark would be introduced by another. These people, racial cousins of the natives, came from the land of the Peloponnesus and surrounding islands. Their arrival would have a most profound effect on the future of the region.

Civilization began many centuries earlier in the Aegean with the rise of the culture of the Minoans, a people who spoke a non-Indo-European language. The Minoan civilization was a thassalocracy centered on the islands of Crete and Thera. The Minoans were traders and artisans par excellence who established contacts with peoples as far flung as the Egyptians and the Canaanites. There is even evidence they influenced these cultures (and vice versa).

Unfortunately for the sedentary Minoans, the Mycenaeans were a healthy semi-barbaric people who were looking to expand their holdings.  Sometimes around the middle of the 15th century BC there was a tremendous natural catastrophe (what exactly remains controversial) which greatly damaged Minoan civilization.  The Minoans might have recovered but for the fact their Mycenaean neighbors took advantage of this fact to invade the island of Crete.  Shortly after this the famed Minoan palaces on the island clearly show Mycenaean character.

The Mycenaeans were not as civilized as the people they conquered but they weren’t dumb brutes, either.  They appreciated the cultural and technological accomplishments of the Minoans and sought to perpetuate them wherever possible.  In addition, they adopted and adapted the political and economic infrastructures of the Minoans.  The Minoans themselves were ultimately merged with their Mycenaean conquerors.

For reasons that are still murky, a couple of centuries after this Mycenaean civilization itself collapsed.  Of all the hypotheses that have been advanced to explain this event the two that have gained the most widespread acceptance among archaeologists are a) internal discord brought about by wars between Mycenaean city-states and b) the arrival into the lower Peloponnesus of another Hellenic-speaking people from the north – the Dorians.

Whatever the truth, by the end of the 11th century BC Mycenaean culture had fragmented.  The following three centuries (1,100 – 800 BC) are remembered by archaeologists and historians as the Geometric or Homeric Age.  Some still call it the Greek Dark Ages.

During this time period the Peloponnesus and surrounding areas saw a marked reduction in material culture.  Cities, towns and even many villages were abandoned. The population of the region as a whole declined considerably.  Monumental stone buildings ceased to be built. Linear B, the script of the Mycenaeans, vanished.  Trade with the outside world effectively ceased.

This is not to say all aspects of higher culture vanished.  The smelting of iron, learned from Cypriots and Levantines, slowly became commonplace.  By the year 900 BC virtually all weapons found in grave goods were made of iron.  What did vanish were higher forms of government.  Monarchies were gone, probably replaced by independent areas ruled by kinship groups.  These kinship groups were led by chieftains who, according to archaeologists, enjoyed a standard of living not much higher than the people they ruled over.

Recovery was slow and uneven, with some areas (like Attica and central Crete) springing back faster than others.  What is known for certain is that by the beginning of the 8th century BC grave goods indicated the economic recovery of the Peloponnesus was well along. The number of graves and ruins also indicates the population was recovering as well.

Even before the end of the 8th century BC Greeks began to expand outward into surrounding regions.  Overpopulation is considered too simplistic an explanation for this phenomenon. As the economy of the region recovered, many adventurous and entrepreneurial types ventured beyond the Aegean to find their fortune or simply to explore the unknown.  The Greeks did not limit themselves to one direction.  Greek settlers fanned out in numerous directions, and the fact many of the new areas were already inhabited did nothing to stop the settlers, either.

For obvious reasons, I shall concentrate on those who chose to travel in a westward direction.  According to all ancient writers, the first Greek settlement on the island of Sicily was the town of Naxos.  It was founded in 735 BC by settlers from the town of Chalcis on the Greek island of Euboea.  It was founded a year before settlers from the Greek cities Corinth and Tenea founded the colony of Syracuse, also in Sicily.  Residents of the modern commune of Giardini-Naxos, built over the site of the ancient city, have erected a monument on the lava beach outside the town to commemorate the arrival of the Hellenes.

The first Greek settlements on the mainland were in the area of modern Naples. These settlements were established sometime in the latter part of the 2nd millennium BC. The first bona fide colony was established in the 9th century BC and called Parthenope.

The colonization of Southern Italy in earnest by Greek settlers occurred in two great waves.  The first occurred in the 8th century BC and was marked by the establishment of the previously named settlements plus other colonies at sites like Cumae (the first Greek colony on the Tyrrhenian Sea), Rhegion (modern Reggio), Kroton (Crotone), Taras (Taranto) and Zancie (Messina) et al.  In 720 BC Achaean and Troezenian settlers would found the city of Sybaris in the Gulf of Taranto.

Descendants of the original settlers in the Naples area plus new arrivals would eventually found another Greek town (Neapolis) on the plain near the Bay of Naples during the second wave of Greek settlement in the 6th century BC.

The second wave of Greek colonization brought with it the establishment of new centers of Greek life at Elea in what is now Campania, Italy.  Southern Italy saw a flourish of Greek settlement during this time, with new colonies being established at Poseidonia (Paestum) c. 600 BC by Achaean Greeks from Sybaris.  There were also colonies established at Lipara (modern Lipari), Akragas (Agrigento) and Kamarina, to name a few.

Due to the warm climate, volcanic fertility of the soil, the abundance of game animals and the mineral richness of the region, many of the new arrivals quickly established wealthy municipalities, especially at places like Sybaris and Syracuse.  The lushness of the region and the wealth of many of its Hellenic inhabitants spread throughout the Mediterranean world, including the Peloponnesus, whose inhabitants took to calling the area “Megale Hellas” (Gr: “Great Greece”)

This wealth would later serve the nascent Greek city-states in the wars they would inevitably fight amongst themselves and the polities back in Hellas.  They would also soon find themselves fighting off other peoples who coveted that wealth, most notably the Etruscans and new arrivals from the coasts of North Africa – the Carthaginians.

Coming soon:  “War and Dominion: The Rise of Magna Graecia”

Posted by Giovanni di Napoli at